“I think of myself as a pianist who is driven to help people who are searching to heal through music.” – Arash Behzadi 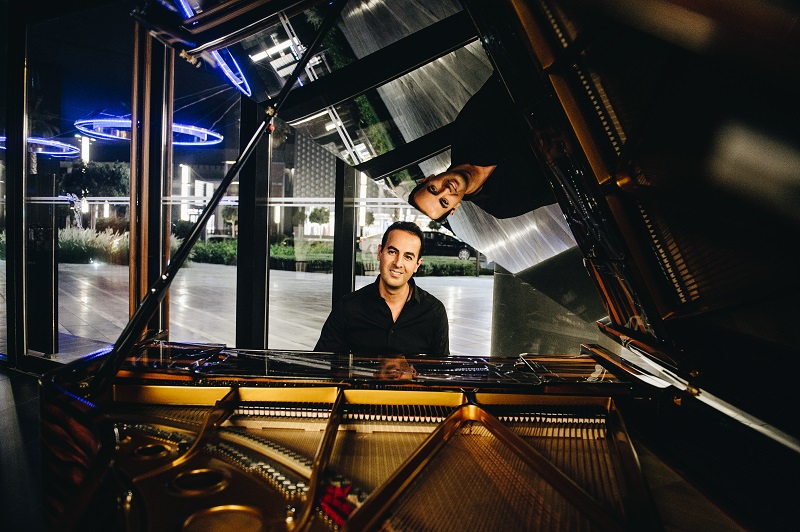 Arash Behzadi’s solo piano compositions are musical narratives, often created in collaboration with poets, dancers and actors, reflecting the ups and down of life through deeply personal stories and transformative experiences which he invites his audience to share.

“I am an actor reliving my experiences in an intensely personal and intimate way,” he explains.

His dynamic improvisational technique was first showcased in his debut album, With Closed Eyes, with its dreamy sense of mysterious yearning, intricate and exciting, but at the same time, calming and freeing.

Loss, yearning, passionate love, deceit and heartache, prescient dreams and healing journeys are all central to the powerful musical narratives in his second album, Elsewhere.

Soul to Soul, his latest album, reflects upon the human condition during these times of unprecedented global challenges, delivering lengthy contemplative pieces in which listeners can seek solace as they reflect on the ambiguities of life’s unknowns.

Arash’s musical direction is one that introduces fresh interpretations of minimalist music yet is rich with evocative visual metaphors inviting the interplay of dance, theatrical performance, film and animation.

Whether the collaboration is with a choreographer, dancer, spoken word poet, actor or a videographer, Arash thinks like a dramatist as he did when composing Joy of Storm on his first album With Closed Eyes. Together with a renowned Iranian dancer/choreographer he created a video in which the dancer unleashes his emotion, whirling about in a downpour, fully giving himself up to elements greater than him. It’s a piece about challenges over which one has no control, about facing difficulties head on until the dread – the dark clouds – lifts.

Madly, a longer more contemplative piece from his third and most recent album Soul to Soul, comes to life in a soon to be released video featuring dancers struggling through an emotional landscape of ambivalence – the push/pull dynamic of two people who crave love and intimacy yet at the same time are terrified of the opposing forces of abandonment on the one hand and of smothering on the other.

His eclectic artistic endeavours also extend into some unique niche areas. Exploring the magical healing properties bestowed by the marriage of music and yoga, Arash is reinventing the impeccable partnership of music and movement, fusing the two, improvising, moment by moment, matching each note to breath and movement.

Enriched by the tranquility and insight that yoga has brought to his life, Arash is passionate about sharing those gifts with others as he introduces his music into the intimate environment of yoga practise.

In 2017, beneath the neo-Gothic arches in the soft stained glass glow of a downtown cathedral he launched his first powerful mix of intense yoga and meditation guided by his piano improvisations which he went on to introduce world-wide in a series of majestic settings as diverse as Bali’s sacred temples to the massive dawn to dusk XYoga Dubai Festival which attracts thousands of yogis from around the world.

“I reach deep inside to synchronize my breathing and my heartbeat to every move the yogis make, translating it into piano interpretation,” Arash, explains. “I feel a connection to every soul – a strong palpable collective energy that inspires my playing as I in turn pour my heart into inspiring the yogis. I’m meditating with them through my music.”

Having explored a wide range of musical narratives in his two previous albums, With Closed Eyes and Elsewhere, all profoundly rooted in his own experiences, Arash now reflects upon his recent soul searching metamorphoses in his latest album, Soul to Soul, delivering lengthy meditative compositions in which listeners can lose themselves. Evolving, initially as balm for his own soul, the pieces stream seamlessly through a gamut of emotions, note by note, as effortlessly as breathing, a product of his own meditations.

The transformative power of music, even when stripped to its essentials, is a constant, driving Arash’s passion to create compositions that heal and restore, springing from what he describes as a life changing awakening of the soul he now feels compelled to share.

“I believe music is the most direct way of connecting to the human spirit. I want to make a difference in people’s lives. That is my intention for my music. It’s timeless and universal and it speaks to people of all ages. It permeates the heart.”

Recalling his visit to a Balinese temple priest, he says quietly, “That is the path he saw for me – that I have the gift of healing energy. He activated and intensified something within me. It’s the desire to make a difference in people’s lives.”